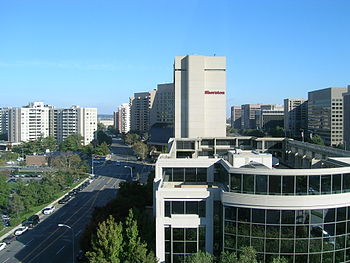 Arlington will make its high-speed fiber network accessible to businesses, federal agencies and other organizations later this year as part of an economic development initiative unanimously approved by the Arlington County Board on Saturday.

Arlington will license access to a 10-mile dark fiber line traversing economic centers — including the Rosslyn-Ballston corridor, Glebe Road, Columbia Pike and Crystal City — that it will own and maintain. It will be an extension of an existing fiber network the county uses to connect municipal buildings and operate things like traffic signals.

Licensees will have to make the final connection to their offices and the county believes the standard license agreement “should expedite business access at reasonable rates,” which weren’t defined,according to a release. The only stipulation is that the final connection is located within Arlington.

The expansion is expected to cost Arlington $4.1 million and it will use a variety of federal, state and county funds to pay for the project. Annual operating expenses could run as much as $800,000, though the county expects to recoup those costs from license fees.

Mark Milliman is a Principal Consultant at Inphotonics Research driving the adoption and assisting local governments to plan, build, operate, and lease access open-access municipal broadband networks. Additionally, he works with entrepreneurs and venture capitalists to increase the value of their intellectual capital through the creation of strategic product plans and execution of innovative marketing strategies. With more than 22 years of experience in the telecommunications industry that began at AT&T Bell Laboratories, Mark has built fiber, cable, and wireless networks around the world to deliver voice, video, and data services. His thorough knowledge of all aspects of service delivery from content creation to the design, operation, and management of the network is utilized by carriers and equipment manufacturers. Mark conceived and developed one of the industry's first multi-service provisioning platform and is multiple patent holder. He is active in the IEEE as a senior member. Mark received his B.S. in Electrical Engineering from Iowa State University and M.S. in Electrical Engineering from Carnegie Mellon University.
View all posts by Mark Milliman →
Tagged  Arlington County, broadband, fiber, ISP, municipal broadband, Optical fiber, telecom, Virginia.
Bookmark the permalink.