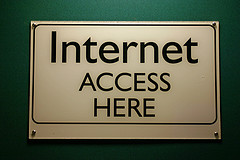 I am personally delighted to see my home state of Iowa increasing broadband penetration.  Like any big data gathering project, the results are only as good as the data put into the database.  I believe that some providers are a little over optimistic on their service availability especially just outside of metropolitan areas.  I honestly think that there are more than 2.3% of the households that are not served by wired Internet.  Just look at the number of households in Warren county outside of Des Moines with no service.  The next step should be to improve the quality of data.  In any case the numbers are very high which for a state that has very long loop lengths area-wise.

New research unveiled today by Connect Iowa shows that the broadband availability gap in the state is shrinking, with 93.5% of Iowa residents now having access to fixed broadband of 3 Mbps download or higher, compared to 92.5% last year.

Nonprofit Connect Iowa has been working since 2009 to ensure that Iowans have access to the economic, educational, and quality of life benefits derived from increased broadband access, adoption, and use.

Among the findings of the new broadband availability research are:

Note: The data in this report are subject to data validation.

“We are thrilled to see the investment being made by providers and that the work we are doing with our state partners is paying off,” said Connect Iowa State Program Manager Amy Kuhlers. “These latest access numbers show we are starting to bridge the broadband access gap and motivates us even more to focus on bringing broadband to the remaining 28,000 Iowans who remain unserved.”

Article Continued on The Gazette…

Mark Milliman is a Principal Consultant at Inphotonics Research driving the adoption and assisting local governments to plan, build, operate, and lease access open-access municipal broadband networks. Additionally, he works with entrepreneurs and venture capitalists to increase the value of their intellectual capital through the creation of strategic product plans and execution of innovative marketing strategies. With more than 22 years of experience in the telecommunications industry that began at AT&T Bell Laboratories, Mark has built fiber, cable, and wireless networks around the world to deliver voice, video, and data services. His thorough knowledge of all aspects of service delivery from content creation to the design, operation, and management of the network is utilized by carriers and equipment manufacturers. Mark conceived and developed one of the industry's first multi-service provisioning platform and is multiple patent holder. He is active in the IEEE as a senior member. Mark received his B.S. in Electrical Engineering from Iowa State University and M.S. in Electrical Engineering from Carnegie Mellon University.
View all posts by Mark Milliman →
Tagged  broadband, Connect Iowa, Internet access, Internet mapping, Iowa.
Bookmark the permalink.