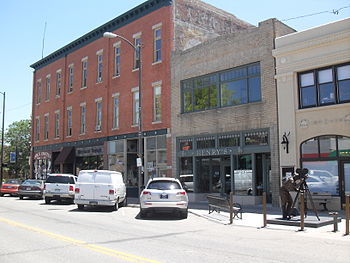 The structure of how the service would operate as well as whether it would be a city-owned and operated service or one developed by a public-private partnership, among other factors, will be part of future discussions on the topic.

Different types of broadband options include DSL (Digital Subscriber Line), cable modem, fiber, wireless and satellite, but the city is looking at a fiber platform to increase connectivity, which exceeds cable or DSL speeds.

Councilor Ralph Trenary said he has attended several state-wide meetings in the past four months where discussions took place about how important reliable and affordable broadband is to communities. Increasing community-owned broadband networks has also become a national focus of the federal government this year.

Mark Milliman is a Principal Consultant at Inphotonics Research driving the adoption and assisting local governments to plan, build, operate, and lease access open-access municipal broadband networks. Additionally, he works with entrepreneurs and venture capitalists to increase the value of their intellectual capital through the creation of strategic product plans and execution of innovative marketing strategies. With more than 22 years of experience in the telecommunications industry that began at AT&T Bell Laboratories, Mark has built fiber, cable, and wireless networks around the world to deliver voice, video, and data services. His thorough knowledge of all aspects of service delivery from content creation to the design, operation, and management of the network is utilized by carriers and equipment manufacturers. Mark conceived and developed one of the industry's first multi-service provisioning platform and is multiple patent holder. He is active in the IEEE as a senior member. Mark received his B.S. in Electrical Engineering from Iowa State University and M.S. in Electrical Engineering from Carnegie Mellon University.
View all posts by Mark Milliman →
Tagged  Colorado, Internet, Internet access, Internet service provider, Loveland, municipal broadband, Public–private partnership.
Bookmark the permalink.