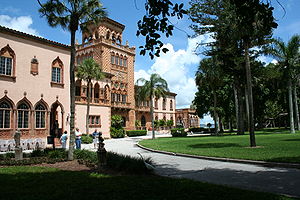 SARASOTA – A British company plans to soup up a number of U.S. cities — including Sarasota — with ultra-high-speed fiber-optic Internet networks.

The discussions have been going on for several months, according to Rich Swier Jr., founder of the Sarasota think tank known as The Hub and a member of a recently created Sarasota broadband task force.

“They were following the Google fiber effort and we connected with them during that campaign,” Swier said.

In a Friday follow-up note to that meeting, Brian Foley, an i3 sales vice president, told Kirschner that the company “would like to move forward to the next step in the process of making Sarasota a FibreCity.”

Foley then outlined the information his company would “need to move forward with the ‘pilot.'”

Asked whether this meant that the British company was contemplating a fiber-optic build-out here, Foley told the Herald-Tribune in a brief phone conversation on Friday, “Yes, that is absolutely correct.

“We have a number of them going on and actually are going to be announcing some here in the states,” Foley said.

E-mails between i3 Group and Sarasota officials make it clear that the company is in early negotiations to build one of its systems within the city.

END_OF_DOCUMENT_TOKEN_TO_BE_REPLACED

Mark Milliman is a Principal Consultant at Inphotonics Research driving the adoption and assisting local governments to plan, build, operate, and lease access open-access municipal broadband networks. Additionally, he works with entrepreneurs and venture capitalists to increase the value of their intellectual capital through the creation of strategic product plans and execution of innovative marketing strategies. With more than 22 years of experience in the telecommunications industry that began at AT&T Bell Laboratories, Mark has built fiber, cable, and wireless networks around the world to deliver voice, video, and data services. His thorough knowledge of all aspects of service delivery from content creation to the design, operation, and management of the network is utilized by carriers and equipment manufacturers. Mark conceived and developed one of the industry's first multi-service provisioning platform and is multiple patent holder. He is active in the IEEE as a senior member. Mark received his B.S. in Electrical Engineering from Iowa State University and M.S. in Electrical Engineering from Carnegie Mellon University.
View all posts by Mark Milliman →
Tagged  broadband, I3, municipal broadband, Optical fiber, Sarasota Florida, Sarasota Herald-Tribune.
Bookmark the permalink.