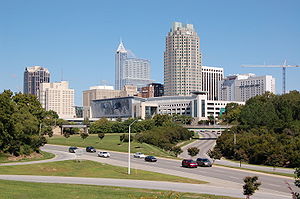 A bill that would place restrictions on the establishment of municipal broadband networks is gaining traction in North Carolina. The proposed legislation, House Bill 129, was passed by the state’s House of Representatives in an 81 to 37 vote on Monday, March 28, and is making its way through the state Senate.

The bill, which has sparked controversy across the state, is called the “Level Playing Field/Local Gov’t Competition” act. The legislation would require communities to alter the way networks are financed and deployed. One section of the bill mandates that a municipal network not price services below their actual costs. The intent of the language appears to be an attempt to protect companies from unfair competition, even though private companies regularly offer incentive deals to attract customers.

For example, some companies might offer high-speed Internet for free for the first three months. That typically would be subsidized by profits from other areas of the company. If H129 becomes law, municipalities would be prohibited from offering the same deals through their own broadband networks.

Another requirement would be that municipal networks calculate their service costs, including all taxes, at the equivalent level that would be applicable to private providers. On its face that stipulation may seem fair, but the bill’s opponents say private companies ultimately end up paying much less in taxes than what is normally applicable, which would put municipalities at a disadvantage.

The bill has had a polarizing effect in North Carolina. Sponsored by state Rep. Marilyn Avila, R-Wake, supporters claim the legislation will protect jobs and promote investment. But those against the bill are adamant that it will devastate the economic future of the state and make it essentially impossible for cities to build their own community networks.

END_OF_DOCUMENT_TOKEN_TO_BE_REPLACED

Legislatures of the past several decades write reactive legislation instead of visionary legislation.  This so-called “Level Playing Field/Local Gov’t Competition Act” is just that: reactive.  The incumbent service providers have bent the ear of some friendly state legislators in North Carolina to introduce legislation that they wrote preventing municipalities from getting into the broadband business.  These legislators dutifully responded by pushing it through the committee and into the general assembly riding on the wave of less government.  Did they challenge these service providers by asking how they plan on meeting the challenge of rural broadband penetration if granted this gift?  Municipal broadband is not a partisan issue or one about expanding the role of government.  It is one of economics, economic development, job growth, and fairness.  The incumbents have not/cannot adequately serve most suburban and rural areas with advanced broadband due to the cost of the last-mile infrastructure.  Actually it is not their fault; it is simple economics.  Municipal broadband can solve that conundrum for them.

The title of this legislation, like most others, is misleading.  The bill is not about leveling the playing field nor introducing competition into the communications services market.  It is about protecting incumbent service providers monopoly in markets.  Markets they admittedly agree that they cannot afford to upgrade to the latest technology.  The act will introduce barriers to the municipalities that service providers are not required to meet.  For instance it is common in the retail industry to offer introductory prices to entice customers to sign a service contract.  Municipalities will be forbidden from offering the same deals.  Municipalities will be required to calculate the total cost of their services including taxes and compare that to the incumbent service providers’ prices to make sure that they are not undercutting them.  The result would allow the private providers to continue to dictate the price of services negating any competition in the market.

Like most legislation, this bill’s results will be the opposite of purported.  It may actually reduce employment in municipalities instead of creating it.  First off the incumbent providers have little to no financial incentive to upgrade facilities in suburban and rural areas because the extra costs associated with the build-outs will take years to pay off with the incremental revenue gained.  Municipal networks often employ private contractors and companies to build, maintain, and operate their networks; thereby creating jobs in the area.  Next there are the service providers that could offer residential and business services, if the network is open-access. They will hire local sales and marketing personnel to acquire customers.  The other affect is the jobs that will be created as people utilize the network to start new and expand existing businesses instead of relocated where better broadband service is available.  This bill is in fact a job killer.

North Carolina along with 24 other states have implemented laws that prevent the spread of broadband throughout their states.  They have reacted to serve not their constituents and their state, but private interests looking to maintain faltering business model.  Gone seem to be the days of writing inspiring and motivating legislation.  Maybe it is because we have legislated most everything we need to, and all we are doing is “shuffling the deck chairs.”  If Representative Avila was an inspired legislator, she would have questioned the incumbent service providers to understand their plans to introduce state-of-the-art broadband services in North Carolina.  She would have asked experts in municipal broadband why cities would want to take on these massive expenses in an already budget challenged time.  Then she would have drafted original legislation that would have allowed municipalities to enter into the broadband business under the conditions that it was treated as a separate entity budget-wise, have a clear-cut business plan, transparent in its operations, enlisted NC-based companies as feasible, and remained open-access.

Such forward-looking legislation would have created jobs and introduced choice across the state.  The incumbents would not be so complacent in offering new services or increasing their prices.  We cannot afford to build these networks on the federal level.  The incumbents would prefer a massive spending/deficit program that would feed money to them to build out these networks much as they have with the USF.  This country cannot afford such programs to benefit such few people.  We have seen the failure of such programs with our transportation infrastructure.  It should not be repeated with our communications infrastructure. Unfortunately more states like Arkansas and South Carolina are considering similar legislation because incumbents realize that the political climate is ripe to convince legislators that municipal broadband is about government take-over of private enterprise.  Legislators are not properly equipped with the facts to make informed decisions.  Content and service providers like Vonage, Google, Amazon, Netflix, and others need to get involved in this effort or else their services will be limited by the small pipes at the end.

Mark Milliman is a Principal Consultant at Inphotonics Research driving the adoption and assisting local governments to plan, build, operate, and lease access open-access municipal broadband networks. Additionally, he works with entrepreneurs and venture capitalists to increase the value of their intellectual capital through the creation of strategic product plans and execution of innovative marketing strategies. With more than 22 years of experience in the telecommunications industry that began at AT&T Bell Laboratories, Mark has built fiber, cable, and wireless networks around the world to deliver voice, video, and data services. His thorough knowledge of all aspects of service delivery from content creation to the design, operation, and management of the network is utilized by carriers and equipment manufacturers. Mark conceived and developed one of the industry's first multi-service provisioning platform and is multiple patent holder. He is active in the IEEE as a senior member. Mark received his B.S. in Electrical Engineering from Iowa State University and M.S. in Electrical Engineering from Carnegie Mellon University.
View all posts by Mark Milliman →
Tagged  Avila, broadband compeition, Broadband networks, HB 129, municipal broadband, NC politics, North Carolina, Politics.
Bookmark the permalink.