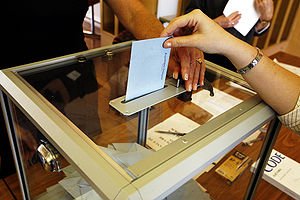 FLORIDA, Mass. — Voters on Wednesday night approved the establishment of a municipal lighting plant, taking the first step in the development of a cooperative broadband system.

The first two articles gave town approval to the continuance of repairs to Gabriel Abbott Memorial School, including to the roof and to the water main. Both warrants quickly passed 28-0.

The third article continued the town’s commitment to the WiredWest initiative. In a ballot vote of 30-1, voters approved the establishment of a municipal lighting plant, in accordance with the provisions of General Laws, Chapter 164, for all purposes including the operation of a telecommunications system and any related services. The law was created more than 100 years ago to allow municipalities to establish electrical utilities and was updated 15 years ago to accommodate telecommunications.

END_OF_DOCUMENT_TOKEN_TO_BE_REPLACED

Mark Milliman is a Principal Consultant at Inphotonics Research driving the adoption and assisting local governments to plan, build, operate, and lease access open-access municipal broadband networks. Additionally, he works with entrepreneurs and venture capitalists to increase the value of their intellectual capital through the creation of strategic product plans and execution of innovative marketing strategies. With more than 22 years of experience in the telecommunications industry that began at AT&T Bell Laboratories, Mark has built fiber, cable, and wireless networks around the world to deliver voice, video, and data services. His thorough knowledge of all aspects of service delivery from content creation to the design, operation, and management of the network is utilized by carriers and equipment manufacturers. Mark conceived and developed one of the industry's first multi-service provisioning platform and is multiple patent holder. He is active in the IEEE as a senior member. Mark received his B.S. in Electrical Engineering from Iowa State University and M.S. in Electrical Engineering from Carnegie Mellon University.
View all posts by Mark Milliman →
Tagged  broadband, Broadband Internet access, municipal broadband, Telecommunication, WiredWest.
Bookmark the permalink.