Want Google Fiber In Your City? Make It Easy For Us, Google Exec Says 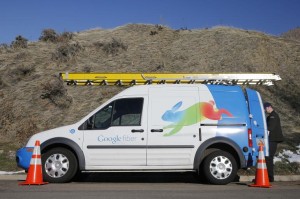 Google Inc.’s high-speed Internet service is slowly rolling out around the U.S., but so far has avoided major metropolitan markets – like New York and Los Angeles – as well as most smaller cities. One Google Fiber executive says bureaucracy is what’s holding back the rollout.

“If you make it easy, we will come,” said Milo Medin, Google Fiber vice president, according to Wired. “If you make it hard, enjoy your Time Warner Cable.”

Cities that want to switch from the slower speed and higher cost of TWC and Comcast need to do more to get Google Fiber in their areas, Medin said. Local governments sticking to outdated approval processes – including ones that require the use of fax machines and outdated maps – are the top reasons why Google Fiber, AT&T GigaPower and other ultra-high-speed broadband service providers avoid rolling out to new areas.

While regulation and the approval process may be part of the problem, analysts from Morgan Stanley say Google is holding out because the process is expensive, and investors are concerned about the search giant’s spending. Medin said that areas with low population density were uneconomical for Internet service providers (ISPs) to enter, and local telephone companies also were holding out on allowing them access to the poles necessary for a rollout.

Mark Milliman is a Principal Consultant at Inphotonics Research driving the adoption and assisting local governments to plan, build, operate, and lease access open-access municipal broadband networks. Additionally, he works with entrepreneurs and venture capitalists to increase the value of their intellectual capital through the creation of strategic product plans and execution of innovative marketing strategies. With more than 22 years of experience in the telecommunications industry that began at AT&T Bell Laboratories, Mark has built fiber, cable, and wireless networks around the world to deliver voice, video, and data services. His thorough knowledge of all aspects of service delivery from content creation to the design, operation, and management of the network is utilized by carriers and equipment manufacturers. Mark conceived and developed one of the industry's first multi-service provisioning platform and is multiple patent holder. He is active in the IEEE as a senior member. Mark received his B.S. in Electrical Engineering from Iowa State University and M.S. in Electrical Engineering from Carnegie Mellon University.
View all posts by Mark Milliman →
Tagged  AT&T, broadband, broadband access, FTTH, Google Fiber, Internet, Internet access, Internet service provider, ISP.
Bookmark the permalink.