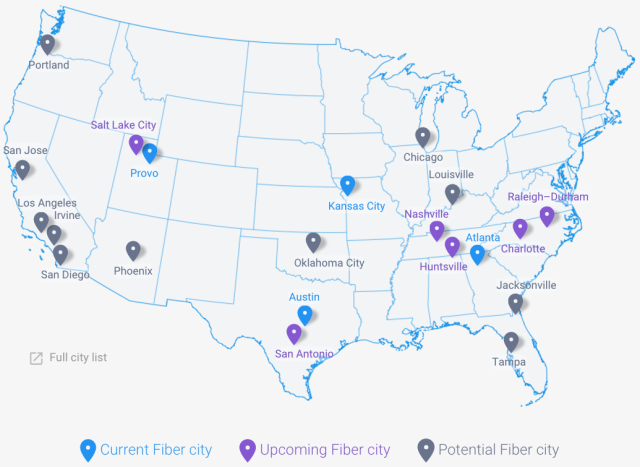 City officials “see it as a low-risk investment, as compared to administering the gigabit Internet themselves, which would require a massive increase in personnel in an arena where they have limited expertise,” local news station WHNT reported today. Google Fiber should be available to the first Huntsville customers by the middle of 2017, but it could take a few years to extend service throughout the city, the report said.

“To date, we’ve built the majority of our Google Fiber networks from scratch,” Google said in its announcement. But in some cities, Google is taking advantage of existing infrastructure. “In Provo, Utah, our Google Fiber service is being delivered over a network we purchased from the city. In Atlanta, Georgia, we’re both constructing our own network and using existing fiber to provide Google Fiber to some apartment buildings. And now, due to the leadership of the Mayor [Tommy Battle] and Huntsville Utilities CEO Jay Stowe, we’ll be working with a muni-owned network to bring our high-speed service to Huntsville.”

Mark Milliman is a Principal Consultant at Inphotonics Research driving the adoption and assisting local governments to plan, build, operate, and lease access open-access municipal broadband networks. Additionally, he works with entrepreneurs and venture capitalists to increase the value of their intellectual capital through the creation of strategic product plans and execution of innovative marketing strategies. With more than 22 years of experience in the telecommunications industry that began at AT&T Bell Laboratories, Mark has built fiber, cable, and wireless networks around the world to deliver voice, video, and data services. His thorough knowledge of all aspects of service delivery from content creation to the design, operation, and management of the network is utilized by carriers and equipment manufacturers. Mark conceived and developed one of the industry's first multi-service provisioning platform and is multiple patent holder. He is active in the IEEE as a senior member. Mark received his B.S. in Electrical Engineering from Iowa State University and M.S. in Electrical Engineering from Carnegie Mellon University.
View all posts by Mark Milliman →
Tagged  Alabama, broadband, broraband access, FTTH, FTTx, Gig Internet, Google, Google Fiber, Huntsville, Internet access, Internet service provider, ISP, municipal broadband.
Bookmark the permalink.