Lexington Goes for a Gig 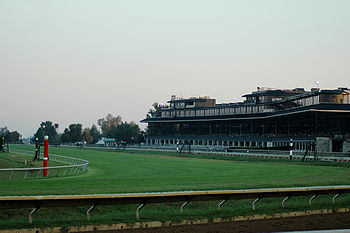 A view of Keeneland’s grandstand at dawn, taken from the last turn leading into the home stretch (Photo credit: Wikipedia)

The city of Lexington, Ky., is famous for its beautiful horse farms and historic bourbon distilleries but not for its broadband. Internet service there could fairly be described as mediocre – the Internet metrics company Ookla recently measured the average download speed in Lexington at 16.2 Mbps, well below the U.S. average of 37.1 Mbps.

On the other hand, unlike some other cities that have launched FTTH initiatives, Lexington isn’t precisely underserved. There is no groundswell of community outrage about broadband. But Jim Gray, the city’s mayor, believes better broadband will give the city a better future, and he vowed to make Lexington a gigabit city. “Every city is in a competitive chase for talent and investment and jobs,” he explains. “This is essential just to stay competitive.”

Gray thinks Lexington offers advantages for Internet service providers that the existing providers do not take account of. For one thing, the city is very dense – about 300,000 residents in 90 square miles – and it’s growing denser. Land beyond the inner core is protected by zoning and by purchase of development rights to protect the horse farms. Thus, infrastructure within the urban service boundary will become increasingly valuable as the population rises.

Another asset is the presence of a major research university, the University of Kentucky. The university brings with it a knowledge economy built around research and development; a highly educated, affluent population; and a vibrant cultural scene. The businesses and households associated with the university are all desirable customers for providers of advanced Internet services. Already, Lexington has the highest concentration of e-book readers in the country, according to The Atlantic, and is the top city in the United States for using the Roku online streaming receiver, according to Roku. As Gray says, “Lexington is a university city, with a highly educated workforce that can leverage greater bandwidth speeds to create new technologies, new ideas and new markets.”

Mark Milliman is a Principal Consultant at Inphotonics Research driving the adoption and assisting local governments to plan, build, operate, and lease access open-access municipal broadband networks. Additionally, he works with entrepreneurs and venture capitalists to increase the value of their intellectual capital through the creation of strategic product plans and execution of innovative marketing strategies. With more than 22 years of experience in the telecommunications industry that began at AT&T Bell Laboratories, Mark has built fiber, cable, and wireless networks around the world to deliver voice, video, and data services. His thorough knowledge of all aspects of service delivery from content creation to the design, operation, and management of the network is utilized by carriers and equipment manufacturers. Mark conceived and developed one of the industry's first multi-service provisioning platform and is multiple patent holder. He is active in the IEEE as a senior member. Mark received his B.S. in Electrical Engineering from Iowa State University and M.S. in Electrical Engineering from Carnegie Mellon University.
View all posts by Mark Milliman →
Tagged  broadband, FTTH, GigE, Internet, Internet service provider, ISP, municipal broadband.
Bookmark the permalink.