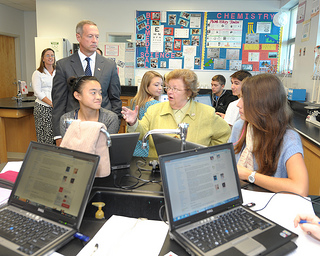 Editorial:  The USCM is asking the federal government to address a local problem unless they would like a federal takeover of education like Common Core has started.  Education is a local issue and should be addressed at the local level just like broadband access.  The mayors state that broadband access is just as important as a “chalkboard and textbooks” but the federal government doesn’t purchase those supplies either.  School districts should work with their city and county governments that grant franchises to telephone and cable companies to provide inexpensive broadband access to schools.  Instead of continuing the outdated concept of Community Access Channels, they should redirect that money to low-cost educational access.  Another alternative would be to build their own municipal broadband infrastructure, and build in the cost of educational use into the least price of the network.  There are several solutions that municipalities can implement without resorting to asking the FCC to add another tax on communication services.

A group of mayors is urging the Obama administration to bring high-speed Internet to more schools and libraries around the country.

Students at every U.S. school should have access to Internet speeds of 100 megabytes per second right now, and one gigabyte per second by 2017, the United States Conference of Mayors (USCM) said in a letter to the Federal Communications Commission (FCC).

The mayors also called for each classroom to have Wi-Fi connectivity.

“This critical update is absolutely needed to bring high-speed broadband to every school and library and Wi-Fi to every classroom,” the mayors wrote. “It’s the single most important step we can take to connect our children to digital learning opportunities that will give them the technological skills they need for the future.”

The mayors said high-speed Internet in schools is just as important as a “chalkboard and textbooks.” But they are concerned that students that do not have broadband access in their schools will be “stranded with 20th century technologies.”
“Today, however, too many of our children are trying to learn skills for tomorrow, with dial-up speeds from the past,” the mayors wrote.

They pointed out that 72 percent of schools do not have adequate Internet.

Mark Milliman is a Principal Consultant at Inphotonics Research driving the adoption and assisting local governments to plan, build, operate, and lease access open-access municipal broadband networks. Additionally, he works with entrepreneurs and venture capitalists to increase the value of their intellectual capital through the creation of strategic product plans and execution of innovative marketing strategies. With more than 22 years of experience in the telecommunications industry that began at AT&T Bell Laboratories, Mark has built fiber, cable, and wireless networks around the world to deliver voice, video, and data services. His thorough knowledge of all aspects of service delivery from content creation to the design, operation, and management of the network is utilized by carriers and equipment manufacturers. Mark conceived and developed one of the industry's first multi-service provisioning platform and is multiple patent holder. He is active in the IEEE as a senior member. Mark received his B.S. in Electrical Engineering from Iowa State University and M.S. in Electrical Engineering from Carnegie Mellon University.
View all posts by Mark Milliman →
Tagged  FCC, Federal Communication Commission, Internet access, United States Conference of Mayors, Wi-Fi.
Bookmark the permalink.