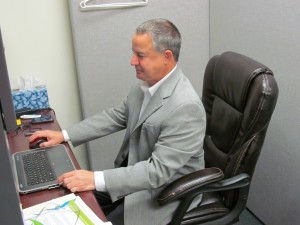 “With nationwide carriers bringing their Internet, voice and Internet-transmitted television services to the county, we are concentrating now on doubling the customer base from the current 50,” CEO David Corrado said.

Even though the county-owned network is solvent – its value exceeds the outstanding balance on the bonds issued to create it – its growth and financial success were hindered in its formative years, 2010 through 2013, by two things, Corrado said.

First there were lengthy negotiations to lower the fees Ohio Edison and AT&T wanted to charge the county to run its fiber lines on existing utility poles. Then, the first company the county hired to operate the network, One Community, was offering its own services to customers instead of selling the use of the network to other telecommunications companies that could bring new services into the county.

Mark Milliman is a Principal Consultant at Inphotonics Research driving the adoption and assisting local governments to plan, build, operate, and lease access open-access municipal broadband networks. Additionally, he works with entrepreneurs and venture capitalists to increase the value of their intellectual capital through the creation of strategic product plans and execution of innovative marketing strategies. With more than 22 years of experience in the telecommunications industry that began at AT&T Bell Laboratories, Mark has built fiber, cable, and wireless networks around the world to deliver voice, video, and data services. His thorough knowledge of all aspects of service delivery from content creation to the design, operation, and management of the network is utilized by carriers and equipment manufacturers. Mark conceived and developed one of the industry's first multi-service provisioning platform and is multiple patent holder. He is active in the IEEE as a senior member. Mark received his B.S. in Electrical Engineering from Iowa State University and M.S. in Electrical Engineering from Carnegie Mellon University.
View all posts by Mark Milliman →
Tagged  broadband, Internet, Internet access, Internet service provider, municipal broadband, open access, Optical fiber, Rural area.
Bookmark the permalink.