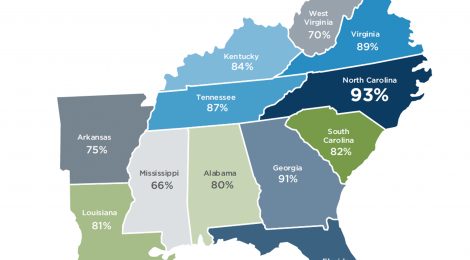 According to FCC data, 93 percent of North Carolina is connected through a combination of anchor institution networks, private providers, and municipal broadband. However, the plan shows that more work needs to be done to connect rural communities.

The report appears to take a position against municipal broadband networks like the ones that already exist in Wilson and Salisbury and instead calls on rural areas and municipalities to form partnerships with private sector providers. As CivSource has reported time and again, the majority of those private sector providers have indicated little to no support for connecting rural and small towns where the subscriber base is likely to remain small.

The North Carolina legislature has already tried to pass laws that would prohibit the development of other municipal broadband networks in the state, however, that effort was pre-empted by the Federal Communications Commission. North Carolina is now suing the FCC over its involvement. (Listen to the oral arguments here.) The suit has the support of telecom companies, which are pushing back against federal supervision, especially if it makes them have to compete for business instead of maintaining monopolies.

Mark Milliman is a Principal Consultant at Inphotonics Research driving the adoption and assisting local governments to plan, build, operate, and lease access open-access municipal broadband networks. Additionally, he works with entrepreneurs and venture capitalists to increase the value of their intellectual capital through the creation of strategic product plans and execution of innovative marketing strategies. With more than 22 years of experience in the telecommunications industry that began at AT&T Bell Laboratories, Mark has built fiber, cable, and wireless networks around the world to deliver voice, video, and data services. His thorough knowledge of all aspects of service delivery from content creation to the design, operation, and management of the network is utilized by carriers and equipment manufacturers. Mark conceived and developed one of the industry's first multi-service provisioning platform and is multiple patent holder. He is active in the IEEE as a senior member. Mark received his B.S. in Electrical Engineering from Iowa State University and M.S. in Electrical Engineering from Carnegie Mellon University.
View all posts by Mark Milliman →
Tagged  broadband, broadband access, broadband deployment, broadband penetration, Federal Communications Commission, Internet access, ISP, municipal broadand, North Carlolina.
Bookmark the permalink.