The road to municipal Internet: Boulder benefits from Longmont’s journey 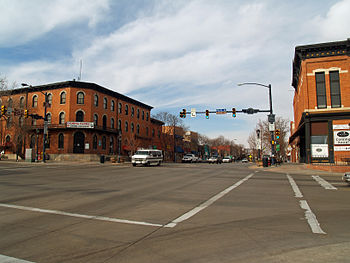 English: Looking north from the intersection of Main St. and 3rd Ave. towards the 300 block of Main St. Longmont, Colorado. (Photo credit: Wikipedia)

Governments do not tend to learn from their mistakes, they just cover them up with more money. Even detailed articles like these fail to ask the question whether government should be doing this or are there better ways of delivering broadband services.

Paul Radliff, of Longmont, had his home connected via fiber-optic cable to the city’s new high-speed Internet service earlier this month.

Under his old DSL service, he could download information at a speed of 20 megabits per second.

With the new municipal network, his Internet, as long as it’s wired in, is now 43 times faster — on a bad day.

“The speed’s amazing,” Radliff said. “It’s like 100 megabits per second more than we ever need. … Playing movies on my TV is almost instantaneous.”

After aiming to be among the first in the nation to do so, Longmont is now rounding out an 18-year journey into offering Internet service through its municipal utility.

It took two private-partnership busts, three elections, $45.3 million and a particularly divisive piece of state legislation, but Longmont is connecting the first customers to NextLight, its “fiber-to-the-home” service.

Mark Milliman is a Principal Consultant at Inphotonics Research driving the adoption and assisting local governments to plan, build, operate, and lease access open-access municipal broadband networks. Additionally, he works with entrepreneurs and venture capitalists to increase the value of their intellectual capital through the creation of strategic product plans and execution of innovative marketing strategies. With more than 22 years of experience in the telecommunications industry that began at AT&T Bell Laboratories, Mark has built fiber, cable, and wireless networks around the world to deliver voice, video, and data services. His thorough knowledge of all aspects of service delivery from content creation to the design, operation, and management of the network is utilized by carriers and equipment manufacturers. Mark conceived and developed one of the industry's first multi-service provisioning platform and is multiple patent holder. He is active in the IEEE as a senior member. Mark received his B.S. in Electrical Engineering from Iowa State University and M.S. in Electrical Engineering from Carnegie Mellon University.
View all posts by Mark Milliman →
Tagged  Boulder, broadband, Colorado, Digital Subscriber Line, FTTH, Internet, Internet access, Internet service provider, ISP, Longmont, municipal broadband.
Bookmark the permalink.