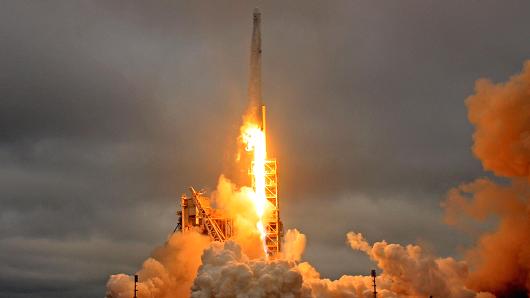 Joe Skipper | Reuters A SpaceX Falcon 9 rocket lifts off on a supply mission to the International Space Station from historic launch pad 39A at the Kennedy Space Center in Cape Canaveral, Florida, February 19, 2017.

SpaceX is on a collision course with the world’s biggest telecom and satellite manufacturing companies.

SpaceX is on a collision course with the world’s biggest telecom and satellite manufacturing companies, as it steps up development of its “Starlink” network of satellites.

The company will soon test its first satellites, Microsat 2a and 2b, which are headed for orbit aboard SpaceX’s Falcon 9 from Vandenberg Air Force Base, California, according to documents filed by the Federal Communications Commission (FCC). These satellites will take the next step into space, which is critical for the network’s progress.

On Saturday, SpaceX scrapped plans to launch on Sunday, in the interest of performing “final checks’, and rescheduled for February 21st. However, the company’s big ambitions remain on track.

Starlink – a name SpaceX filed to trademark last year – is an ambition unmatched by any current satellite network. The largest existing constellation is built by Iridium, with the company halfway through launching its new 75 Iridium Next satellites to space, set to finish deployment in the next year.

The stakes are high, with a space race for a new era viewed as a linchpin to help make life better here on earth. According to the FCC there are about 14 million rural Americans, as well as 1.2 million Americans on tribal lands, who do not have access to even the slowest mobile broadband services.

Mark Milliman is a Principal Consultant at Inphotonics Research driving the adoption and assisting local governments to plan, build, operate, and lease access open-access municipal broadband networks. Additionally, he works with entrepreneurs and venture capitalists to increase the value of their intellectual capital through the creation of strategic product plans and execution of innovative marketing strategies. With more than 22 years of experience in the telecommunications industry that began at AT&T Bell Laboratories, Mark has built fiber, cable, and wireless networks around the world to deliver voice, video, and data services. His thorough knowledge of all aspects of service delivery from content creation to the design, operation, and management of the network is utilized by carriers and equipment manufacturers. Mark conceived and developed one of the industry's first multi-service provisioning platform and is multiple patent holder. He is active in the IEEE as a senior member. Mark received his B.S. in Electrical Engineering from Iowa State University and M.S. in Electrical Engineering from Carnegie Mellon University.
View all posts by Mark Milliman →
Tagged  broadband, Internet, Iridium, ISP, rural access, rural broadband, satellite, SpaceX, Starlink, wireless internet.
Bookmark the permalink.