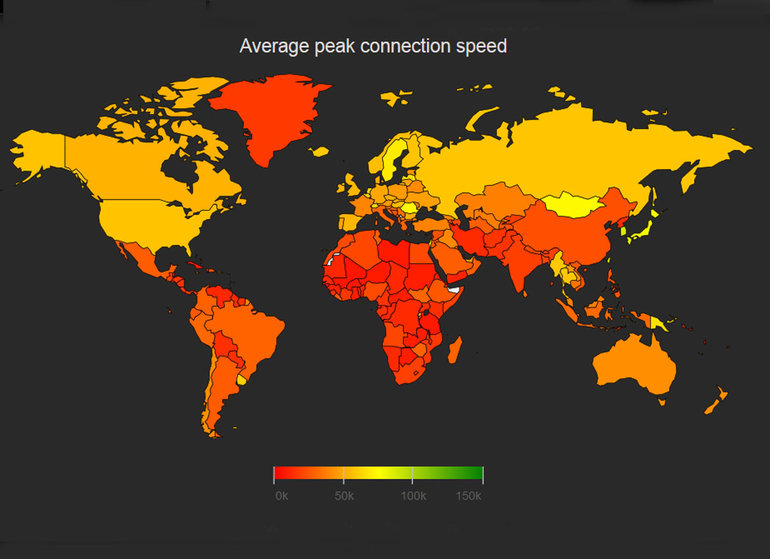 The Internet is getting faster, according to the latest quarterly State of the Internet report from Akamai Technologies. Global connection speed increased 14 percent year over year, and as the IPv4 addressing space was recently depleted in North America, analysts recommend accelerating IPv6 adoption in the U.S. — now at 18 percent — to keep up the pace with leading adopters like Belgium, a nation that sees 35 percent of its connections occurring over IPv6.

While some areas of the world saw minor declines in broadband adoption, the overall trend still points toward strong growth, said David Belson, senior director of industry and data intelligence at Akamai Technologies and the report’s editor.

“The investments that are being made in improving broadband and improving connectivity are in fact paying off. What we’re seeing also is increased Internet usage, and it shows also that it’s still obviously worth investing in improving broadband connectivity,” Belson said. “While things have improved over time, there’s still a long way to go, and in many cases there are geographies that are a lot further behind than others.”

The report concludes that the globe’s average connection speed is 5.1 Mbps. South Korea maintains the highest average connection speed of any nation at 20.5 Mbps, despite an 11 percent quarter-over-quarter speed decrease and a 19 percent year-over-year decrease. Also in the top 10 are Sweden, Norway, Switzerland, Hong Kong, the Netherlands, Japan, Finland, Latvia and the Czech Republic. The report also contains other speed analysis like percentage of overall population with a connection over 4 Mbps (see map below) and peak connection speed.

Mark Milliman is a Principal Consultant at Inphotonics Research driving the adoption and assisting local governments to plan, build, operate, and lease access open-access municipal broadband networks. Additionally, he works with entrepreneurs and venture capitalists to increase the value of their intellectual capital through the creation of strategic product plans and execution of innovative marketing strategies. With more than 22 years of experience in the telecommunications industry that began at AT&T Bell Laboratories, Mark has built fiber, cable, and wireless networks around the world to deliver voice, video, and data services. His thorough knowledge of all aspects of service delivery from content creation to the design, operation, and management of the network is utilized by carriers and equipment manufacturers. Mark conceived and developed one of the industry's first multi-service provisioning platform and is multiple patent holder. He is active in the IEEE as a senior member. Mark received his B.S. in Electrical Engineering from Iowa State University and M.S. in Electrical Engineering from Carnegie Mellon University.
View all posts by Mark Milliman →
Tagged  access networks, Akamai Technologies, broadband, broadband service, Internet, Internet mapping, internet speeds, Internet traffic, municipal internet.
Bookmark the permalink.