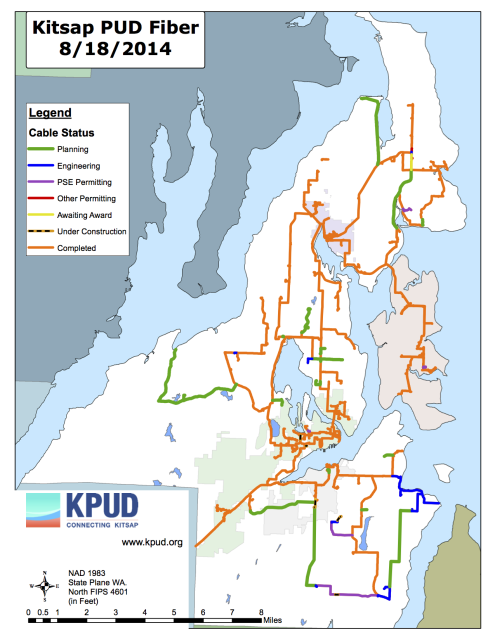 Current Washington state law allows for municipalities to own and operate broadband networks, but they can only sell wholesale access, meaning that customers must purchase so-called “last mile” service through a third party, even if it’s only a few yards from the existing fiber line to the house being connected.

In Seth’s story, Comcast twice told him that his house was already connected to their cable broadband network. It wasn’t, and never had been. Likewise, CenturyLink’s database showed Seth’s address as being part of their decent-speed DSL service. Again, it was not.

Through some clever red-tape wrangling (and no small personal expense), Seth and the Kitsap County Public Utility District [PUD] were eventually able to get him service, but it’s not a process that every unconnected homeowner would, or could, be able to navigate.

“That shouldn’t have to happen,” State Senator Christine Rolfes of Kitsap tells Consumerist. “It’s absolutely vital that every citizen has the ability to get online.”

Mark Milliman is a Principal Consultant at Inphotonics Research driving the adoption and assisting local governments to plan, build, operate, and lease access open-access municipal broadband networks. Additionally, he works with entrepreneurs and venture capitalists to increase the value of their intellectual capital through the creation of strategic product plans and execution of innovative marketing strategies. With more than 22 years of experience in the telecommunications industry that began at AT&T Bell Laboratories, Mark has built fiber, cable, and wireless networks around the world to deliver voice, video, and data services. His thorough knowledge of all aspects of service delivery from content creation to the design, operation, and management of the network is utilized by carriers and equipment manufacturers. Mark conceived and developed one of the industry's first multi-service provisioning platform and is multiple patent holder. He is active in the IEEE as a senior member. Mark received his B.S. in Electrical Engineering from Iowa State University and M.S. in Electrical Engineering from Carnegie Mellon University.
View all posts by Mark Milliman →
Tagged  CenturyLink, Comcast, Consumerist, DSL, FTTH, Internet, Internet access, ISP, Kitsap County, last mile, muncipal Internet, municipal broadband, Washington.
Bookmark the permalink.