Construction on building out Longmont’s fiber loop to start Monday 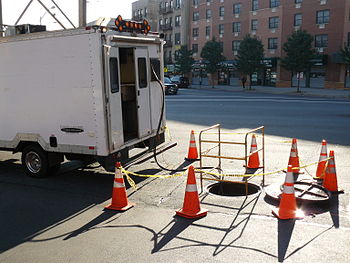 Englewood-based TCS Communications will begin construction on phase one of building out the city’s fiber optic loop on Monday.

“Postcards were mailed out yesterday” to homeowners that will be part of the initial phase of construction, Jennifer Wherry, TCS’s director of risk management, told the Longmont City Council at its Tuesday study session.

The initial round of postcards was mailed out to 720 homes, Wherry said. Her company will also be using door flyers in both English and Spanish to let people know there will be work done in their area.

The company will be working with homeowners to make the process as smooth as possible as they access people’s property, she said, although there are likely to be problems that arise as there would be with any construction project. Two of those could be — her crews have seen them come up before, Wherry said — invisible dog fences and underground sprinkler lines.

To field questions, TCS will be manning a call center six days a week with extended hours, she said.

TCS was one of four firms that bid on the build out, submitting a winning bid of $20,095,022. The work will done in phases around the city and is expected to be completed by 2017.

City manager Harold Dominguez said the fiber buildout will be done at the same time as other major construction projects the city has planned for the next few years, almost all related in some way to last September’s flooding.

TCS will be installing equipment made by Uptown Services, whose principals are based in Scottsdale, Ariz. and Boulder.

Neil Shaw, one of those principals, gave a demonstration to council about what type of equipment will be used in the installation. He brought examples of the 18-inch-tall “pedestals” that will be installed around the city, and they in turn will feed 10-inch-tall “flower pots.” There will be 3,000 and 6,000 of those, respectively, set up around the city, Shaw said.

“When we’re done the distribution system will pass every home and business in Longmont,” Shaw said.

Tom Roiniotis, director of Longmont Power and Communications, said that his office has been fielding a lot of questions from residents excited about the fiber buildout, but he told council that his department’s goal is to work within the budget as expeditiously as possible but make sure the network is built to last.

More information on the city’s fiber optic buildout plans can be found athttp://ci.longmont.co.us/lpc. Click on the “gigabit city” banner.

Mark Milliman is a Principal Consultant at Inphotonics Research driving the adoption and assisting local governments to plan, build, operate, and lease access open-access municipal broadband networks. Additionally, he works with entrepreneurs and venture capitalists to increase the value of their intellectual capital through the creation of strategic product plans and execution of innovative marketing strategies. With more than 22 years of experience in the telecommunications industry that began at AT&T Bell Laboratories, Mark has built fiber, cable, and wireless networks around the world to deliver voice, video, and data services. His thorough knowledge of all aspects of service delivery from content creation to the design, operation, and management of the network is utilized by carriers and equipment manufacturers. Mark conceived and developed one of the industry's first multi-service provisioning platform and is multiple patent holder. He is active in the IEEE as a senior member. Mark received his B.S. in Electrical Engineering from Iowa State University and M.S. in Electrical Engineering from Carnegie Mellon University.
View all posts by Mark Milliman →
Tagged  broadband, Longmont, Longmont Colorado, municipal broadband.
Bookmark the permalink.