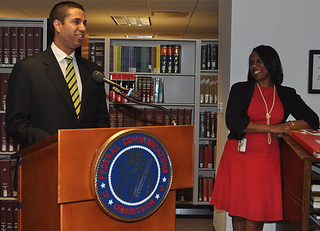 In a speech that attempted to rally the faithful to his “light touch regulation” approach, the commissioner was also joined by Sen. John Thune, R-S.D., at the Free State Foundation last week. Both slammed approaches to net neutrality through public utility regulation under Title II of the Communications Act, or under the less draconian Section 706. While “the former is outdated and politically corrosive,” Thune said, “the latter is legally untested and potentially far too broad.”

Neither of these provisions of law were ever intended by Congress to apply to the currently dynamic and competitive broadband marketplace, Thune added. Both forms of regulation would yield uncertainty for businesses and end users, not less.

Despite regulatory proponents’ best efforts to paint the communications industry as “dominated by monopolies and duopolies,” Thune and Pai said that all evidence pointed to the contrary. Since 1996, the private sector has invested about $1.2 trillion into building and upgrading U.S. communications networks, including over $68 billion worth of capital investments in 2012 alone, Pai said.

Equally unfounded are claims that broadband providers “extract undue profits form users.” Thune pointed to research by former Clinton administration official Everett Ehrlich finding that the average profit margin for Fortune 500 broadband providers was only 3.7 percent versus “a whopping 24″ percent for companies that offer services on top of the broadband infrastructure.

The 1996 Telecom Act may not have been perfect, but Thune said it successfully encouraged competition in the communications sector.