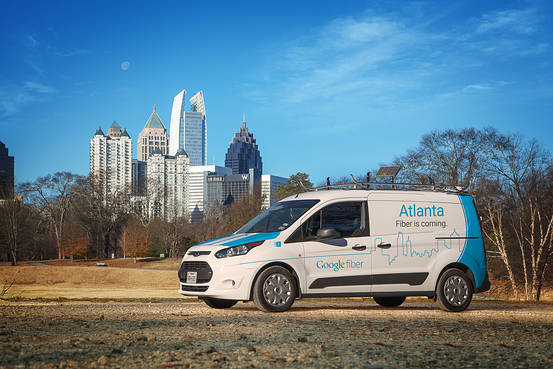 Alphabet Inc. is making its biggest bet yet on spreading connectivity across the U.S., through its newly independent fiber business.

Alphabet Inc.GOOGL -0.93% is making its biggest bet yet on spreading connectivity across the U.S., through its newly independent fiber business.

Google Fiber, Alphabet’s fast Internet service, said Tuesdayit is planning to come to Los Angeles and Chicago, the second and third-largest U.S. cities by population, if they pass a long review.

“While we can’t guarantee that we’ll be able to bring Fiber to Chicago and L.A., this is a big step for these cities and their leaders,” Jill Szuchmacher, director of Google Fiber’s expansion efforts, wrote in a blog. “Expansion planning for a project of this size is a huge undertaking.”

There are now 20 cities where Google Fiber is providing service already, building its network or considering building, including Atlanta and Austin. The 20 metro areas contain about 5% of the total U.S. population and include six of the 10 largest U.S. cities by population.

Its expansion plans have become a lot more aggressive since Google re-organized itself into the Alphabet holding company earlier this year. The goal is to give newer businesses more freedom to invest while making them more accountable for their financial performance.

“Google Fiber looking at big cities is a sign of greater aggressiveness,” said Blair Levin, who led broadband Internet initiatives at the Federal Communications Commission for several years. “It is ultimately going to have to stand on its on two feet, without the support it previously required from Alphabet. To do that, it needs a certain scale that requires a presence in a number of bigger cities.”

Mark Milliman is a Principal Consultant at Inphotonics Research driving the adoption and assisting local governments to plan, build, operate, and lease access open-access municipal broadband networks. Additionally, he works with entrepreneurs and venture capitalists to increase the value of their intellectual capital through the creation of strategic product plans and execution of innovative marketing strategies. With more than 22 years of experience in the telecommunications industry that began at AT&T Bell Laboratories, Mark has built fiber, cable, and wireless networks around the world to deliver voice, video, and data services. His thorough knowledge of all aspects of service delivery from content creation to the design, operation, and management of the network is utilized by carriers and equipment manufacturers. Mark conceived and developed one of the industry's first multi-service provisioning platform and is multiple patent holder. He is active in the IEEE as a senior member. Mark received his B.S. in Electrical Engineering from Iowa State University and M.S. in Electrical Engineering from Carnegie Mellon University.
View all posts by Mark Milliman →
Tagged  broadband, broadband access, Chicago, fiber, FTTB, FTTH, FTTx, Gogle Fiber, Internet service provider, ISP, Los Angeles, Optical fiber.
Bookmark the permalink.