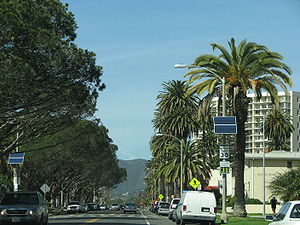 Santa Monica is making their excess fiber work for them to drive economic development and put money back into their general fund.  They receive over $1 million in revenue per year just leasing dark fiber to a few institutions.  Imaging how much they could be earning with a community-wide infrastructure.

DOWNTOWN — Something runs underneath Santa Monica. Something dark. Something that reaches into City Hall, into schools, into hospitals, into office buildings.

But this dark something isn’t exactly menacing. In fact, it’s meant to help the city be technologically advanced and attract businesses to locate here.

City Hall has been leasing its dark fiber to local businesses for four years with the intention of attracting businesses to locate here in order to spur economic development. The revenue from the leasing has then gone toward providing free public wireless internet.

“It all goes back to the community,” said Jory Wolf, chief information officer of Santa Monica.

Running underneath the city, there are strands of glass capable of transmitting large amounts of data relatively quickly, 10 gigabits per second (Gbps). Comparatively, a typical home computer downloads any where from 1.5 to 6 Gbps of data. The information is sent in the form of light pulses, so without equipment attached to both ends transmitting data, this glass is called dark fiber. When it is being used, it is referred to as lit fiber. These type of fiber optic networks are typically used for high powered operations such as networking various office locations of a business.

City Hall installed a network of dark fiber approximately 10 years ago. After implementing it in its own network at 32 locations including schools, parking structures and traffic signals, there was a chunk of fiber that was still not being used, Wolf said.

About four years ago, Google approached City Hall and asked about leasing this dark fiber, Wolf said. Though the city had always planned to begin leasing its unused fiber, this pushed the plan forward by six months to a year.

Municipal leasing of dark fiber is not unheard of, and Santa Monica is comparatively new to the game. In the near vicinity, Los Angeles’ Department of Water and Power, Anaheim and Burbank all lease dark fiber.

Burbank first laid its fiber in the late 1980s and began leasing in the mid 1990s, said Robert DeLeon, a senior electrical services planner in Burbank. It currently leases to 15 studios, such as Warner Brothers and Disney, or studio-related businesses, like post-production companies. Like Santa Monica, Burbank’s main goal in leasing its dark fiber was to attract business. But at $200 per strand per mile, Burbank is currently making approximately $1 million that is being put back into the general fund.

Santa Monica is also leasing to 15 businesses that include hospitals, entertainment companies and new media outlets, among others, but is only making $270,000. It was never Santa Monica’s intention for the leasing of dark fiber to be a major source of revenue, Wolf said.

“We’re helping businesses get broadband and helping the economic development of the city,” Wolf said.

What money has been made from the leasing has gone back to the public in the form of the 23 free wifi hotspots at popular public locations such as the Third Street Promenade, Palisades Park and the Santa Monica Pier, Wolf said.

Despite there being other options in locations to lease dark fiber, Wolf said businesses are attracted here because of the vibrant beach community. He often gets phones call asking about leasing dark fiber from businesses looking to relocate, but he did not know for certain how many businesses specifically located here for the dark fiber.

Though there are other options for obtaining a fiber optic connection, such as AT&T, Kacperski said the hospital decided to lease from City Hall because hospitals are community based and because City Hall has better customer service than private carriers.

“We needed to change the way the fiber came into the hospital, and they were there to do it within hours,” Kacperski said. “We met with them, everything was on schedule, and they kept us up to date.”

City Hall is currently in the process of making its dark fiber lit, meaning that when businesses lease it, it will already be capable of transmitting data. This will hopefully be an added attraction for businesses to locate here, Wolf said.

“Having lit fiber defrays the cost to businesses of having to construct equipment to make it lit,” Wolf explained.

END_OF_DOCUMENT_TOKEN_TO_BE_REPLACED

Mark Milliman is a Principal Consultant at Inphotonics Research driving the adoption and assisting local governments to plan, build, operate, and lease access open-access municipal broadband networks. Additionally, he works with entrepreneurs and venture capitalists to increase the value of their intellectual capital through the creation of strategic product plans and execution of innovative marketing strategies. With more than 22 years of experience in the telecommunications industry that began at AT&T Bell Laboratories, Mark has built fiber, cable, and wireless networks around the world to deliver voice, video, and data services. His thorough knowledge of all aspects of service delivery from content creation to the design, operation, and management of the network is utilized by carriers and equipment manufacturers. Mark conceived and developed one of the industry's first multi-service provisioning platform and is multiple patent holder. He is active in the IEEE as a senior member. Mark received his B.S. in Electrical Engineering from Iowa State University and M.S. in Electrical Engineering from Carnegie Mellon University.
View all posts by Mark Milliman →
Tagged  Economic development, municipal broadband, municipal fiber, Optical fiber, Santa Monica California.
Bookmark the permalink.