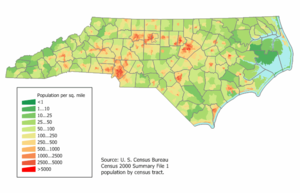 A lawmaker in North Carolina proposed a bill that would curtail communities from building their own broadband networks. The move marks the fourth time since 2007 that a state legislator has attempted to limit cities’ ability to create municipal broadband networks.

The most recent proposed measure — “An act to protect jobs and investment by regulating local government competition with private business,” would impose a host of restrictions on cities that want to create their own networks. Among others, the law would curb cities’ ability to fund broadband networks, advertise them, or price the service below-cost.

Last year, a similar proposal would have effectively imposed a moratorium on new community-based networks by preventing cities from using revenue from other public utilities to finance broadband networks. That measure, which drew heated opposition from municipal broadband proponents, never gained traction with lawmakers.

END_OF_DOCUMENT_TOKEN_TO_BE_REPLACED

Mark Milliman is a Principal Consultant at Inphotonics Research driving the adoption and assisting local governments to plan, build, operate, and lease access open-access municipal broadband networks. Additionally, he works with entrepreneurs and venture capitalists to increase the value of their intellectual capital through the creation of strategic product plans and execution of innovative marketing strategies. With more than 22 years of experience in the telecommunications industry that began at AT&T Bell Laboratories, Mark has built fiber, cable, and wireless networks around the world to deliver voice, video, and data services. His thorough knowledge of all aspects of service delivery from content creation to the design, operation, and management of the network is utilized by carriers and equipment manufacturers. Mark conceived and developed one of the industry's first multi-service provisioning platform and is multiple patent holder. He is active in the IEEE as a senior member. Mark received his B.S. in Electrical Engineering from Iowa State University and M.S. in Electrical Engineering from Carnegie Mellon University.
View all posts by Mark Milliman →
Tagged  Broadband networks, broadband regulation, municipal broadband, North Carolina, rural broadband.
Bookmark the permalink.