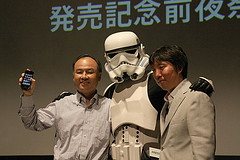 “Metal is the old way; metal is stupid,” says Son. “It gets rusty, and the older it gets, the more it costs to maintain.”

NTT East and NTT West control the majority of the copper lines and fiber installations in Japan and charge other telcos for their use. The two were once a giant national telecom monopoly and are now 34 percent owned by the Japanese government. In addition, the two NTT companies also compete with the telcos by offering the same telecom services. According to Son, operating and maintaining this infrastructure is causing the NTTs to lose US $3.6 billion a year.

To make Japan’s telecom industry more efficient and competitive, Son says that both NTTs should relinquish their debt-incurring infrastructure business, scrapping all copper lines entirely, and instead join with SoftBank, the other telcos, and the government in investing in an all-fiber network to be installed “city by city” by a new infrastructure company. This new company would “put all of us on an equal footing,” says Son, who was once ranked close to Microsoft founder Bill Gates as the world’s richest person.

END_OF_DOCUMENT_TOKEN_TO_BE_REPLACED

Mark Milliman is a Principal Consultant at Inphotonics Research driving the adoption and assisting local governments to plan, build, operate, and lease access open-access municipal broadband networks. Additionally, he works with entrepreneurs and venture capitalists to increase the value of their intellectual capital through the creation of strategic product plans and execution of innovative marketing strategies. With more than 22 years of experience in the telecommunications industry that began at AT&T Bell Laboratories, Mark has built fiber, cable, and wireless networks around the world to deliver voice, video, and data services. His thorough knowledge of all aspects of service delivery from content creation to the design, operation, and management of the network is utilized by carriers and equipment manufacturers. Mark conceived and developed one of the industry's first multi-service provisioning platform and is multiple patent holder. He is active in the IEEE as a senior member. Mark received his B.S. in Electrical Engineering from Iowa State University and M.S. in Electrical Engineering from Carnegie Mellon University.
View all posts by Mark Milliman →
Tagged  Digital Subscriber Line, DSL, Fiber to the x, FTTH, Japan, SoftBank.
Bookmark the permalink.