By DAVE GRAM
The Associated Press 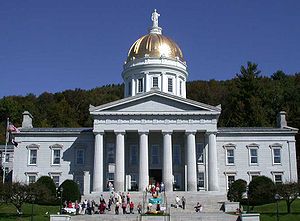 EAST MONTPELIER, Vt. — Marlene and Mike McCarty, real estate brokers who do much of their work at home less than four miles from the Vermont Statehouse, say they spend hundreds of dollars and hours each month on things they wouldn’t have to if they had broadband Internet access.

Despite promises for years by state officials and phone and cable companies that they would have broadband by 2010, they’re still waiting. Now Vermont is in the heat of a gubernatorial campaign, and the candidates are making a new round of promises about broadband and fixing Vermont’s spotty cellular phone coverage.

“I’ll believe it when I see it,” Mike McCarty said.

Experts say Vermont’s mountains and hills block wireless signals. Its sparse population of about 622,000 makes stringing cables to widely scattered rural homes and businesses too expensive to be profitable in many areas. The upshot is that Vermont has struggled to keep up with the information age.

“In most rural areas you have a very challenging business proposition for broadband,” said Christopher Campbell, executive director of the Vermont Telecommunications Authority. That state agency, created in 2007, is promoting Vermont’s efforts to expand both broadband and cellular phone service statewide.

“That doesn’t mean it can’t be done,” Campbell added. “It has been done. It’s been done in Vermont. It’s even possible that if we waited long enough somebody would figure out how to do it all without any help. The problem is we can’t afford to wait.”

END_OF_DOCUMENT_TOKEN_TO_BE_REPLACED

Mark Milliman is a Principal Consultant at Inphotonics Research driving the adoption and assisting local governments to plan, build, operate, and lease access open-access municipal broadband networks. Additionally, he works with entrepreneurs and venture capitalists to increase the value of their intellectual capital through the creation of strategic product plans and execution of innovative marketing strategies. With more than 22 years of experience in the telecommunications industry that began at AT&T Bell Laboratories, Mark has built fiber, cable, and wireless networks around the world to deliver voice, video, and data services. His thorough knowledge of all aspects of service delivery from content creation to the design, operation, and management of the network is utilized by carriers and equipment manufacturers. Mark conceived and developed one of the industry's first multi-service provisioning platform and is multiple patent holder. He is active in the IEEE as a senior member. Mark received his B.S. in Electrical Engineering from Iowa State University and M.S. in Electrical Engineering from Carnegie Mellon University.
View all posts by Mark Milliman →
Tagged  broadband, Broadband Internet access, municipal broadband, Vermont.
Bookmark the permalink.