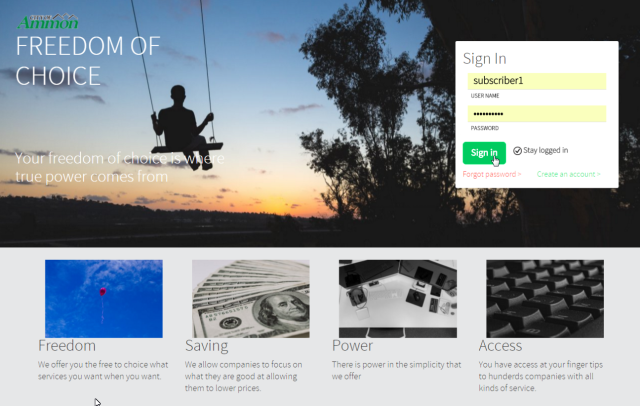 Most cities and towns that build their own broadband networks do so to solve a single problem: that residents and businesses aren’t being adequately served by private cable companies and telcos.

But there’s more than one way to create a network and offer service, and the city of Ammon, Idaho, is deploying a model that’s worth examining. Ammon has built an open access network that lets multiple private ISPs offer service to customers over city-owned fiber. The wholesale model in itself isn’t unprecedented, but Ammon has also built a system in which residents will be able to sign up for an ISP—or switch ISPs if they are dissatisfied—almost instantly, just by visiting a city-operated website and without changing any equipment.

Ammon has completed a pilot project involving 12 homes and is getting ready for construction to another 200 homes. Eventually, the city wants to wire up all of its 4,500 homes and apartment buildings, city Technology Director Bruce Patterson told Ars. Ammon has already deployed fiber to businesses in the city, and it did so without raising everybody’s taxes.

Patterson gave Ars a rundown of how the network was built and a demo of the Web portal customers will use to purchase service. You can also watch this video report on the network produced by the Institute for Local Self-Reliance (ILSR):

Mark Milliman is a Principal Consultant at Inphotonics Research driving the adoption and assisting local governments to plan, build, operate, and lease access open-access municipal broadband networks. Additionally, he works with entrepreneurs and venture capitalists to increase the value of their intellectual capital through the creation of strategic product plans and execution of innovative marketing strategies. With more than 22 years of experience in the telecommunications industry that began at AT&T Bell Laboratories, Mark has built fiber, cable, and wireless networks around the world to deliver voice, video, and data services. His thorough knowledge of all aspects of service delivery from content creation to the design, operation, and management of the network is utilized by carriers and equipment manufacturers. Mark conceived and developed one of the industry's first multi-service provisioning platform and is multiple patent holder. He is active in the IEEE as a senior member. Mark received his B.S. in Electrical Engineering from Iowa State University and M.S. in Electrical Engineering from Carnegie Mellon University.
View all posts by Mark Milliman →
Tagged  Ammon, broadband, Idaho, Internet, Internet access, Internet competition, Internet service, Internet service provider, ISP, municipal access, municipal broadband, municipal networks, open access, open access broadband, open access network.
Bookmark the permalink.