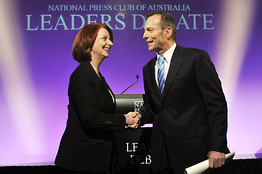 CANBERRA—Australian Prime Minister Julia Gillard on Friday unveiled an expanded footprint for a planned national high-speed fiber Internet network that will now reach 93% of homes and businesses, up from 90% previously.

The network is a defining policy for Gillard’s ruling center-left Labor government ahead of an Aug. 21 general election.

But the program isn’t universally loved, even though it is popular with many voters. Australia’s main conservative Liberal-National opposition coalition has questioned the need for such an expensive service and has threatened to scrap the plan if it returns to power.

Telstra realizes that it is better for them to support this effort than try to compete.  If they chose to compete against service providers using the NBN, they would burn capital needlessly and still not achieve the results of their competition.  They would be offering less HD and 3D programming and slower Internet speeds than their competition.  So to participate in NBN, Telstra gives up its ducts and existing mid-mile fiber, and the government will operate its phone services, emergency services, and payphones.  Although I applaud the creation of an open-access fiber infrastructure, I think that the Australian government has encroached too far into private enterprise.  The government is essentially entering the telecommunications business through the creation of USO Co. which takes them back to the days of Telecom Australia when they were the PTT.

Australia’s going all-in with its government-run fiber network. The government has now convinced the country’s dominant telco, Telstra, to sign on with the scheme, get rid of its copper and cable lines, and transition its subscribers to the open-access national fiber program. When the project is complete, Australia will have taken an almost unprecedented step for a country of its size: legacy telecommunications infrastructure will be almost gone.

Although Australia had planned to move forward with its AUS$43 billion fiber network with or without Telstra, Telstra’s decision to join the party is a significant one—the company could have held out and fought to keep its customers from defecting to fiber, setting the stage for a long platform war. In the end, though, there just weren’t many benefits to doing this; a recent report from McKinsey and KPMG reemphasized the fact that the new fiber buildout would “accelerate the evolution of the industry,” and it would be hard to compete with open-access fiber-to-the-home on speed.

When the FCC issued its National Broadband Plan earlier this year, it set some modest goals for the nation: 100Mbps to 100 million homes by 2020, universal service of 4Mbps everywhere.

Australia plans to do things… a bit differently. Within the next eight years, the Australian government will spend AUS$43 billion (US$38 billion) to build its own “world-class broadband infrastructure” that will deploy fiber to 93 percent of all Australian homes and bring 12Mbps broadband to everyone else. The network will be wholesale only and will be open access, enabling every ISP to use the fiber to offer services.